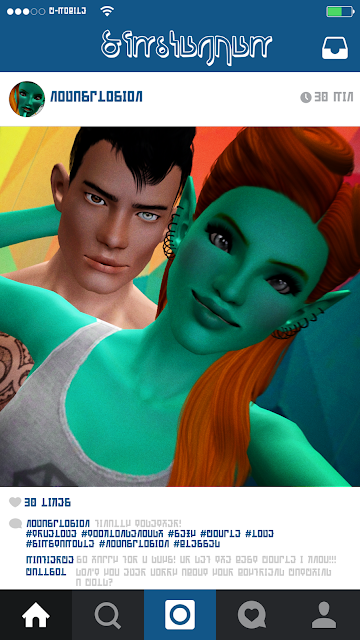 Quentin winces. He knows exactly what's going on. Despite all of her complaints about her family, despite her constant worrying about them intruding on their life in Aurora Skies, despite all of that, Luna is on Simstagram, stalking her siblings.

"Quen, look!" Luna shoves her phone in his face, "Can you believe it?"

He squints at the screen,"Umm, Nova has a boyfriend? That's nice, hon."

Quentin stares at her until she lets out an exasperated sigh, "You don't get it."

Luna rolls her eyes as she taps Elysia's number on the screen of her phone. It rings once, then Elysia picks up.

"Did you see it?" Elysia's voice is so loud that Quentin can hear it across the room. He retreats to the bedroom in search of peace and quiet. 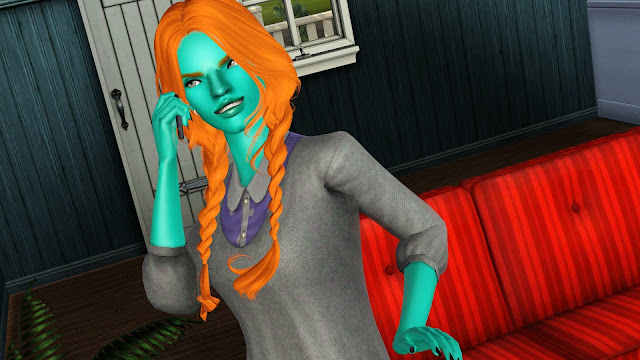 "Gross, right? I just knew this was going to happen.”

"How long has this been going on?" Luna feels fiercely protective of her younger sister, and Mercury has always skeeved her out.

"I mean, he's been creeping on her on and off for years. But they apparently only got together a couple of days ago. He’s been living with her since you left for Aurora Skies, though.”

“Ew,” that’s the only response Luna can muster, “Wait, I thought he was like mom’s age? He looks good…” She trails off. Good thing Quentin left the room, lest he see her blushing.

“That’s the thing. He is numerically the same age as mom and dad. I think.”

“You think?” Luna’s not used to hearing that from her sister. Elysia knows everything about everyone.

“Well, I know Crux met him  before we were born and he was about their age. But when he showed up again a couple of years ago, he wasn’t much older.”

“What does that mean?”

“How the hell am I supposed to know? He was probably cryogenically frozen or something.”

“Well can’t you read his mind?” Luna can’t let go of this nagging feeling that something bad is going to happen to Nova if Mercury is part of her life.

“I wonder what his story is…” Luna trails off. She thinks about these kind of things a lot--she’s been trying to piece together for a long time everything that happened with her mother, her father, and Crux. She knows the basics of her mother’s life. Her mother is an alien, and was sent to Lucky Palms on a research mission. Her mother’s planet was kind of sort of evil in a generic way. Her mother defected. She told Luna some of this, but was mum about the rest.

“Elly, you’re a writer. Do you ever think about writing about mom’s adventures? Sci-fi novels are kind of popular right now.”

“I don’t have time for that. Next week I’m going to China, and the week after that I’m going to Egypt. This travel writing gig has me tapped out.”

“Oh,” Luna tries to hide her disappointment, “I thought it was a good idea…” 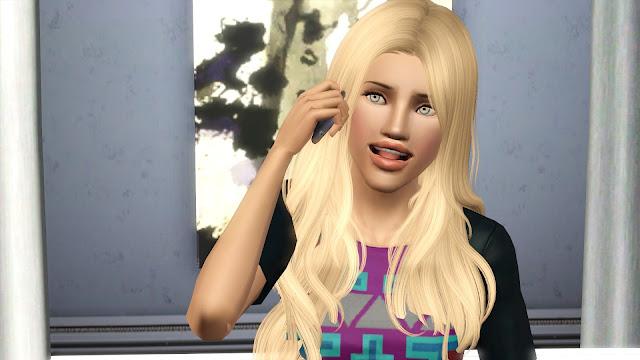 Elysia is quiet for a moment. “Why don’t you write about it? It’s not a bad idea, and I can put you in contact with my agent. He helped me publish my most recent book.”

Elysia sighs, “I don’t have time for this right now, Lulu. Either write the book or don’t, but I need to get off the phone.”

Luna sniffles a couple of times and then starts bawling, “ I don’t know why you have to always be so mean to me!”

Oh crap, Elysia sighs again and rolls her eyes, now I’m going to be on the phone all night. “I’m sorry, Luna….” 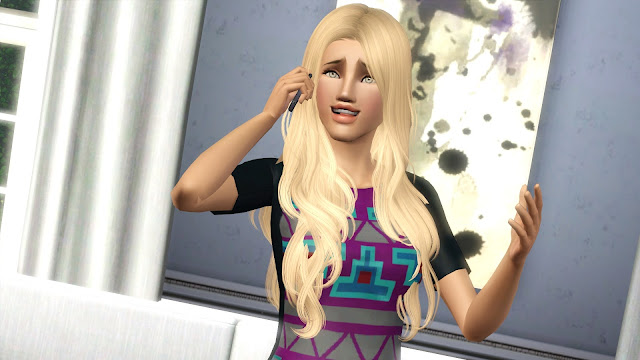 It takes Elysia almost half an hour to make peace with Luna. The whole time, she lavishes her sister with compliments and praise: “You’re so creative, Luna! You understand emotion so well, Luna! You read a lot, Luna! I’m sure you can write a novel. Of course, Luna! It’ll be a bestseller, Luna!” 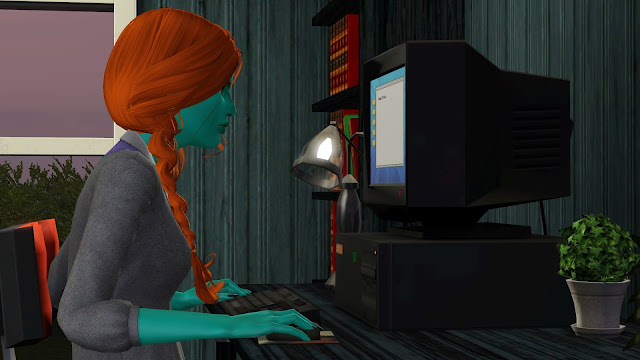 Sufficiently complimented, Luna plops down in front of her computer. Quentin had bought it at a garage sale. It smelled weird and it needed to have a fan pointed at it on particularly hot days, but it works. She pauses for a few moments, staring at the screen. Finally, she starts typing. And typing. And typing.

A few days later, she has a book. It’s not very long, and she’s not sure of the quality--in fact, she's downright suspicious considering how quickly she wrote it. But she takes Elysia up on her offer, and contacts Elysia’s agent. He asks her to come up with a brief summary, so he can shop it around. She ponders for awhile, before coming up with what she feels is a mediocre description:

The Collective, by Luna Bee
Cynosura Tyr is not like other members of The Collective, the totalitarian government of the planet Halcyon. She is rash, curious, and kind-hearted. And when she is sent on a mission to study human life in the sleepy town of Riverview, she finds herself torn between the cold embrace of The Collective and the possibility of true love.


Well, it’s better than nothing. 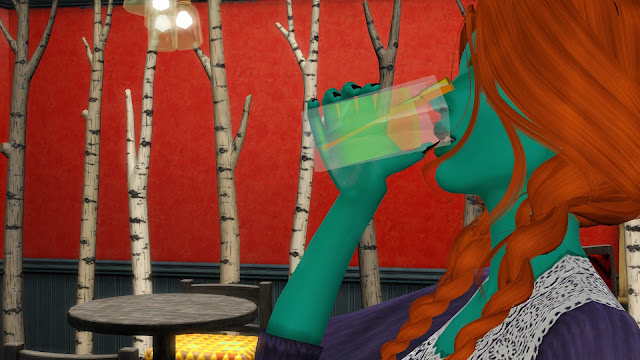 Physically, she’s on a date with Quentin at The Red Lantern, a dive down the street from their cottage. But her mind is in the future, in a time where she’s a bestselling author and she doesn’t have to worry about money. She sips on her drink, a cheap, sour-tasting cocktail.

“Enjoying your drink?” Quentin’s voice snaps her out of it.

“Huh? Oh, yeah. It’s okay,” alcohol isn’t really Luna’s cup of tea. Actually, she much prefers tea. She wonders if this place has any.

“Once you get a job, maybe we can come here more often?” There it is. Quentin’s passive aggressive jab about getting a job. He’s been doing this for weeks. Any time they do something fun, or see something they want at the store, or talk about their future in any way at all, he says, “Hey, once you get a job we’ll be able to do ______!”

“Yeah, once I get a job,” Luna mumbles. What if her book is a success? She can’t work and write at the same time. But she hasn’t even told him about the book. He thinks she’s been applying to jobs all day, every day. There aren’t many places hiring full-time in Aurora Skies. The people who get jobs hold on to them.

Quentin senses the downshift in mood. “Do you want to dance?” He’s determined to make this a good date. After all, he’s already spent six bucks on drinks. Sunk cost fallacy and all that. 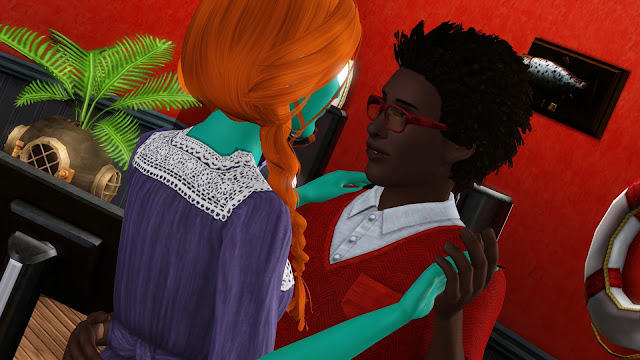 They’re the only patrons there, so the bartender switches the stereo to a slow song. She’s been a bartender long enough to know that something is going on between the couple. Quentin wraps his right arm around Luna’s and gently grabs her hand.

“You look beautiful tonight.” The way her hair frames her face drives him absolutely wild. He just wishes she didn’t always have a sad look in her eyes.

“Thanks.” Luna isn’t afraid of silence, so she lets the word hang in the air.

“So how has your job search been going?” The couple keeps swaying, even though their bodies are tense and stiff.

“I’ve been meaning to talk to you about that,” Luna wants to stop dancing, but Quentin’s grip on her is firm. “I haven’t found a job.”

“You’ve been looking for weeks, Luna. What about that part-time job at the grocery store?”

“I don’t want to work at the grocery store--”

“It’s not about wants, Luna. We need money.” 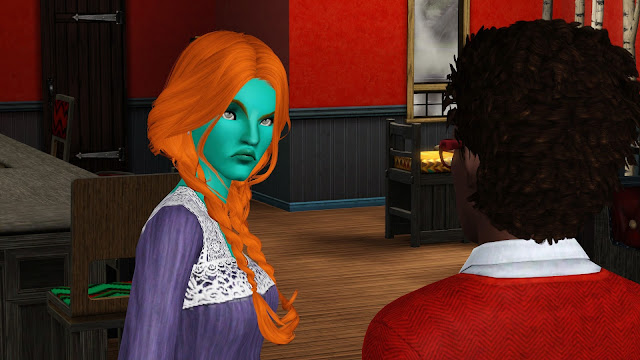 “That’s easy for you to say, Quen. You found the perfect job on day one,” Luna snaps as she pushes away from him. Quentin has been playing in the house band for the local theatre since the day after the moved to Aurora Skies. It was serendipity. “I’ve been trying to tell you for awhile, but I wrote a book.”

“A book?” This conversation is confusing to Quentin. He thought they were talking about jobs.

“Yeah, a novel. It was just accepted by the publisher, and they’ve paid me up front,” Luna looks down at the floor. She doesn’t know why she’s so scared to talk about this book. She hopes none of her family reads it.

“How much?” That was not the response she expected.

“Umm. About 500 up front, and royalties each week depending on how well it sells.”

“I enjoyed writing it…” 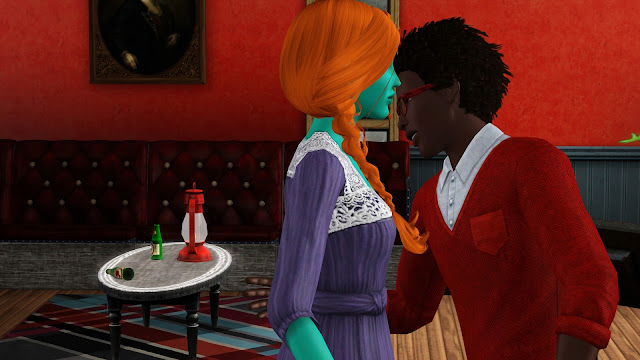 “You know, you could probably write and work,” Quentin suggests, “and the grocery store won’t take up that much time. I can pick up an application for you tomorrow.”

They walk home in silence.

The next morning, Quentin is gone before Luna even wakes up. He leaves dishes in the sink, and food on the counter. She angrily begins to clean it up. What does he think I am--a maid? She scrubs the dishes so hard she chips one. 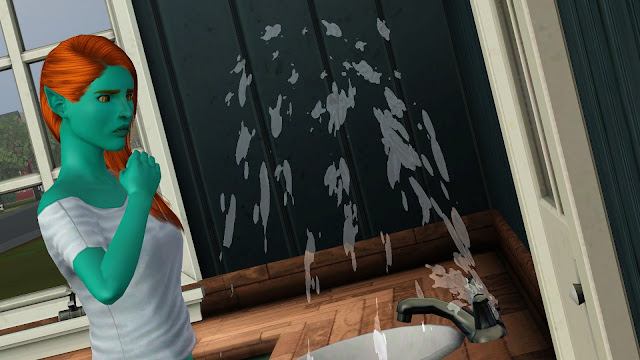 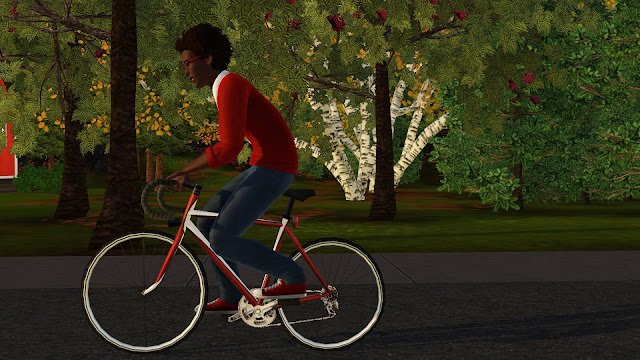 Meanwhile, Quentin leaves the grocery store and hops on his bike. It’s a beautiful early autumn day. The leaves are starting to turn, and the air is crisp and cool. He’s heard the winters in Aurora Skies can be brutal, so he tries to enjoy the weather before it becomes miserable.

He parks his bike on the front lawn and hops up the stairs. He can’t wait to talk to Luna. But as he opens the front door, he’s bombarded by swears. 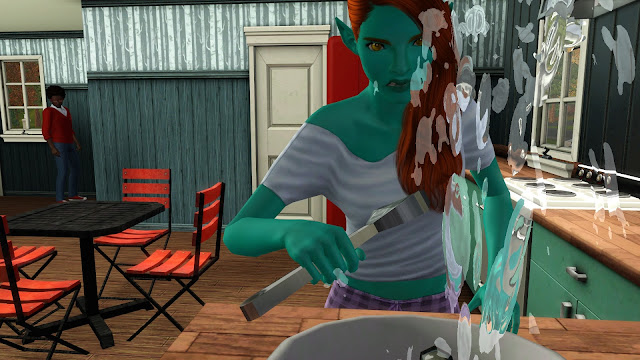 “God fucking dammit mother fucking bastard shit sink…” Luna doesn’t like to swear. It reminds her too much of her mom. But right now, it feels appropriate.

“I broke the sink cleaning up YOUR,” she pauses and points at him for effect, “your damn dishes!”

“Could you leave it for a second? I brought something for you.”

“The job application? Just leave it on the table. I’ll get to it.” 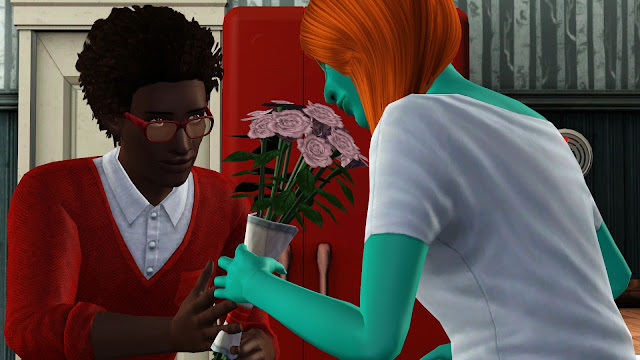 “No, something else.” Luna whips around, ready to snap when she sees Quentin holding a bouquet of flowers. “Luna, I was such an asshole last night. I’ve been so focused on building a life here that all I’ve thought about is the pragmatic stuff.”

She raises an eyebrow, “What, am I not pragmatic?” She still feels a bit like fighting.

“That’s not what I mean. I’ve been focused on money and savings so that maybe someday we can have kids, but I haven’t been focusing on the most important part about our new life: us. I wasn’t supportive. I’m sorry.” He takes a breath before continuing, “You wrote a book and all I could think about was money. I’m so proud of you, Luna! You’re a published author, and if you want to pursue that further I’ll support you the whole way.” 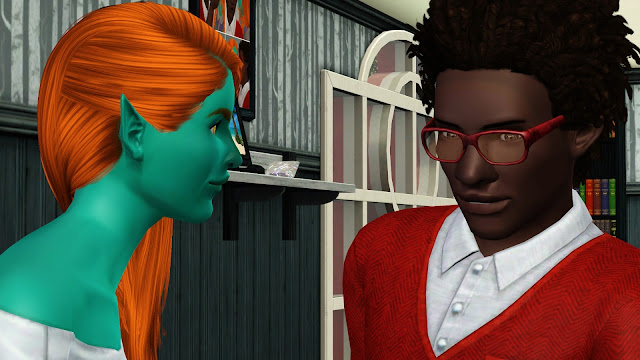 Luna leans in, “So you admit you’re wrong?” 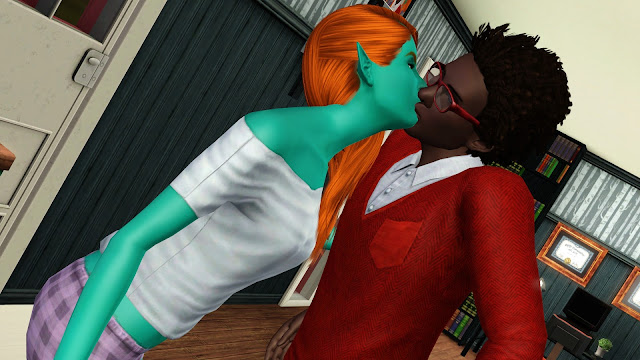 “Good. I’m glad you know it,” Luna smiles and kisses him.

“Look at me--making out with a famous author,” Quentin jokes, “soon everyone is going to know your name.”

“Oh maker, I hope not!” Luna gets a sinking feeling. Maybe she should have chosen a pseudonym.

Luna proudly displays the bouquet on the kitchen table. Quentin doesn’t tell her that he bought the flowers with a coupon. He doesn’t want to cheapen the moment.

Author’s note--For the uninitiated, Nova is Luna’s younger half-sister. Elysia is Luna’s sister who can read minds. Mercury is a mysterious human who can phase through walls, and he’s been a young adult since before Luna was even born. Weird.

Owl Face
I play The Sims 3 and write about my pixel people. Sometimes I write too much.

This is a random legacy challenge in the second generation. This is an extension of my original random legacy, which is on hiatus.